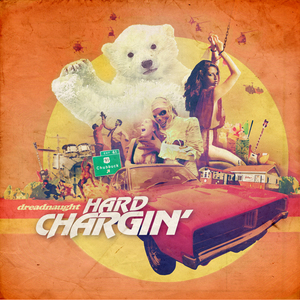 Over the course of more than 20 years, a veritable ton of gigs, a lot of really friggin' weird albums, and more metric shifts than you can shake a stick at, the ever-evolving Dreadnaught has carved out a musical niche unlike any other. This is because, very simply, we're totally ...

And I can say this for the equally simple reason that I'm partly to blame.

This spring, in 2017, the perpetually idiosyncratic Dreadnaught – drummer Rick Habib, guitarist Justin Walton, and me, Bob Lord, the guy writing this – will release our long-awaited (by us, at least) album HARD CHARGIN'. Utterly uncompromising multi-movement prog-rock opuses, gritty bar-band Americana, experimental electronic music, music for ad agencies and radio stations, even music for orchestra... there's not a lot we haven't done at this point. We're clearly in too deep.

Yet this album goes even deeper. After pumping out the back-to-back EPs HAVE A DRINK WITH DREADAUGHT (2013) and GETTIN' TIGHT WITH DREADNAUGHT (2015), we saved some of our most out-there (and, oddly enough, direct and straightforward) ideas for this collection. We've got mummies, we've got polar bears, there are tiki drinks and hamburgers and even a luau, with our own grunting and groaning persisting all through the gloaming.

If you think that sounds odd, you should have been there at the beginning. Our first 10 years were wild ones, morphing from a too-out-there-to-be-enjoyable group of young musicians at the University of New Hampshire in 1996 into an avant-rock battering ram with the release of the award-winning, genre-nuking THE AMERICAN STANDARD in 2001. When I found myself overdubbing flamenco-style clapping onto a track with drum loops, nylon-string guitar, bass (intentionally, of course) distorted so badly that the actual notes were hard to hear, keyboards that sounded like Kerry Minnear busted something in his amp in a satin-draped haze and kept playing, all presented like a 1957-era doo-wop group sucked into 2057 via a heretofore unknown wormhole… that’s when I knew it was magic.

We like to use the studio as a weapon of strategic attack. From the fully instrumental, fusioned-up Americana- and electronic-inspired MUSICA EN FLAGRANTE to the spastic, unadorned trio-only musical explosions of LIVE AT MOJO to the more vocally-based yet no less outlandish new material on the double-disc semi-retrospective hybrid HIGH HEAT & CHIN MUSIC, we’ve explored every nook and cranny that our collective hearts desired.

In between were always unusual and enjoyable gigs, like a commissioned cover of The Who’s “Going Mobile” for an advertising campaign, some music for independent films, a recording of a newly-arranged and orchestrated version of a track from THE AMERICAN STANDARD for symphony orchestra, and the theme song for New Hampshire Public Radio's flagship program "The Exchange." If nothing else, we know how to have our cake and eat it too.

Since 2005, we've been the house band for The Music Hall/New Hampshire Public Radio series Writers On A New England Stage, and we've composed and arranged music for authors, artists, and thinkers such as Dan Brown (who sat in on piano with us for a ripping rendition of “Birthday” by the Beatles, as a matter of fact), John Updike, Patti Smith, Stephen King, Salman Rushdie, Madeleine Albright, Ken Burns, Alan Alda, John Irving, Chris Matthews, Neil Gaiman, and US Supreme Court Justice Sonia Sotomayor, among others. The program is heard by hundreds of thousands of listeners across New England and has

earned us a reputation as a fun, nice, audience-friendly musical group… and how we’ve pulled the wool over everyone’s eyes is way, way beyond me.

Sure, we’ve done our own things over the years too, but the gravitational pull of this project simply will not let us out of its orbit. We've played in more than half the states of the union and along the way have been privileged to share the stage with artists (and deep band influences) like John Entwistle, Tony Levin, NRBQ, and a ton of others. Our records have won awards and we've won acclaim, but nothing interests us as much as just doing what we love to do: make music that confounds every single expectation one could possibly have.

Really, what is the point of doing what has already been done? We'll leave that to the other folks. Duck for cover... head for the hills... here comes Dreadnaught.

“Prog-rock listeners freak out when they hear a chicken-pickin’ guitar, pop listeners turn it off when the meter changes every other...

“Prog-rock listeners freak out when they hear a chicken-pickin’ guitar, pop listeners turn it off when the meter changes every other bar, classical and jazz listeners generally find it too heavy and bombastic. But there’s a little bit of all that in here, so how exactly do you decode this thing?” asks Bob Lord of Dreadnaught, who in his capacity as CEO of PARMA Recordings was named one of Musical America’s top 30 national ‘Influencers’ in 2015. “I honestly have no idea. It made sense at the time.”

For over two decades Rick Habib (drums), Justin Walton (guitar), and Lord (bass) have defied being decoded and refused any easy categorization, producing numerous eclectic releases, touring the country, and appearing with artists as wide-ranging as legendary Who bassist John Entwistle, author Dan Brown, NRBQ, and even Supreme Court Justice Sonia Sotomayor. It is an unusual mix.

A high-energy power trio reveling in quirky twists and turns, fast changes, and extended forms, Dreadnaught has a recorded sound built around deep-focus detail. “As a group, we’re not writing songs in the traditional sense, not trying to get the world to sing along,” explains Habib. “We like to make people want to dial in and pay attention, to make them laugh.”

The band’s new album Hard Chargin’ is destined to do both. The album’s tracks recall Rush or a sillier Fugazi (the first “That’s the Way You Do It”) one moment, and Willie Nelson or a wonderfully befuddled George Jones (the second “That’s the Way You Do It”) the next. Some tracks come out screaming in full Fred Frith-style madness (“Express Delight”), while some coo and groove their beautiful bassy, brassy way into your ear with the playfulness of Frank Zappa or Steely Dan (“Bo-Leg-Ba”).

On Hard Chargin’, Dreadnaught’s studio experience and arrangement expertise busts out left and right, each cut an ornate mosaic of timbre and time. Yet the music works differently in a live setting, where it is pared down by condensing the studio arrangements to better suit the trio format.

“We create a lot of sound together on stage, always have,” says Walton. “But we consider live performance to be a completely different artform than the crafting of a musical recording like this album, and while the tunes are the tunes, we like to approach each in its own way.”

Lord is clear that the band is indeed something unto itself in a business capacity as well as a musical one, which is partly why the album is being released on their own Red Fez label. “I have a policy of complete separation of church and state at PARMA,” he says. “The focus is entirely on the artists and projects we produce as a company, not the personal projects of the staff, myself included, no co-mingling allowed. Dreadnaught is its own thing, for its own purposes, and definitely apart from our day jobs even if they are in the music business.”

The prolonged experimentation of Dreadnaught does appear to have a clear purpose and goal however: Pure enjoyment and amusement for fans of oddball, far out, intellectually acute music and it seems for the band itself.

Going far out isn’t a grim, grave venture for this group, and there are no furrowed avant brows or self-aggrandising composerly ways here. Hard Chargin’ has adventurous musical fun at its heart, a feeling the band members trace back to their 1970s childhoods.

“We all watched The Electric Company growing up, Warner Brothers cartoons, Saturday morning television, all these musical experiments shown to kids as part of their regular viewing,” reflects Habib.

“We heard ‘Peg’ as kids while shopping at Marshall’s with our mothers too, that did something,” says Walton.

“And Juicy Fruit. The fact is, when you play with the same people for this long you develop a clearly defined, streamlined shared artistic language. We usually communicate with a short series of grunts and eyelash flicks, or possibly some clicking sounds,” jokes Lord. “We’ve been doing this for a while now, let’s put it that way.”